Doing Business with the World

When trading with the world you need to clearly understand what costs are liabilities “the buyer” and “the seller “are responsible for. This has been defined by the International Chamber of Commerce in 2010 and in simplified form is:

DUTIES OF BUYER/SELLER ACCORDING TO INCOTERMS 2010 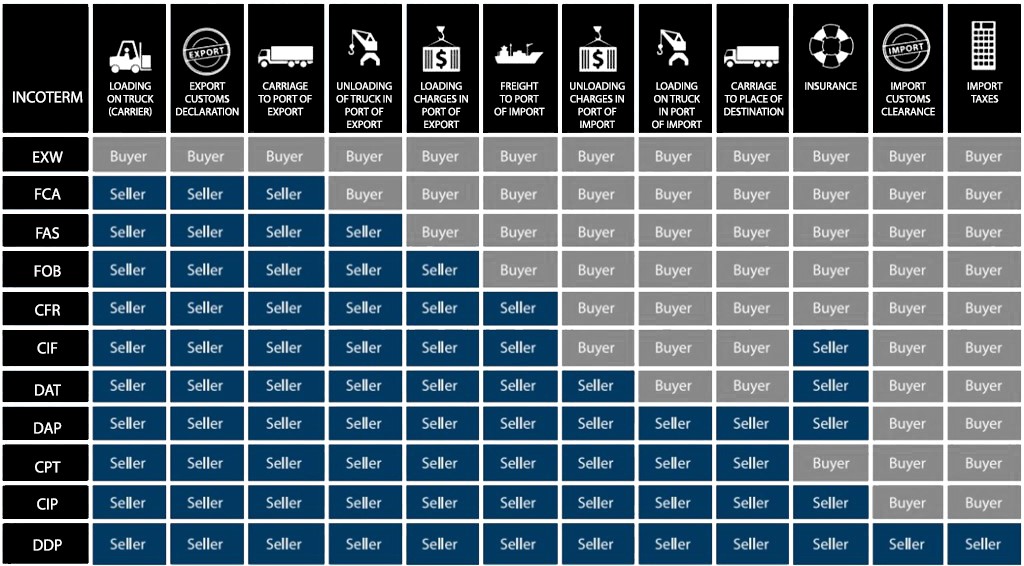 Incoterms are a series of pre-defined commercial terms published by the International Chamber of Commerce (ICC) that are widely used in International Commercial Transactions or Procurement processes.

The Incoterms 2010 rules are standard sets of trading terms classified by a series of three-letter trade terms related to common contractual sales practices.  The rules are intended to clearly communicate the tasks, costs, and risks associated with the transportation and delivery of goods.

By agreeing on an Incoterms rule and incorporating it into the sales contract, the buyer and seller can achieve a precise understanding of what each party is obliged to do, and where responsibility lies in event of loss, damage or other mishap.

There are 11 different terms, each of which helps users deal with different situations involving the movement of goods. Incoterms also deal with the documentation required for global trade, specifying which parties are responsible for which documents.

The definitive publication on the Incoterms 2010 rules is the ICC publication number 715, which is available from most major book sellers.  This is essential reading for those with responsibility for setting a corporate policy or negotiating contracts with trading partners or service providers.

Incoterms can be divided into two main groups:

Another useful way of classifying the rules is by considering:

This results in four groups:

Below are all eleven Incoterms and a brief description. For a visual representation of these terms, please check our Incoterms wall chart.

Note: Party Terms – Shipper is the Seller of goods and Consignee is the buyer of goods.

EXW (EX-Works)
This arrangement places the minimum responsibility on the shipper with greater responsibility on the consignee. In an EX-Works transaction, goods are made available for pickup at the shipper’s factory or warehouse and “delivery” is accomplished when the goods are released to the consignee’s freight forwarder. The shipper is not responsible for loading the goods on the vehicle provided by the consignee or for clearing the goods for export, unless otherwise agreed.  The consignee is responsible for making arrangements with their forwarder for insurance, export clearance and handling all other paperwork, and bears all costs and risks involved in taking the goods from the shipper’s premises to the desired destination.

FCA (Free Carrier)
In this transaction, the shipper fulfils their obligation to deliver when they have handed over the goods, cleared for export, into the possession of the appointed carrier by the consignee at the specified place.  If no precise point is indicated by the consignee, the shipper may choose within the place or range stipulated where the carrier shall take the goods into their charge.  When the shipper’s assistance is required in making the contract with the carrier (such as in rail or air transport), the shipper may act at the consignee’s risk and expense.  The term carrier means any person who is contracted to undertake the performance by rail, sea, road air, inland waterway or by a combination of such modes (multimodal).

FAS (Free Alongside Ship)
In these transactions, the consignee bears all the transportation costs and the risk of loss of goods. The shipper fulfils their obligation to deliver when the goods have been placed alongside the vessel on the quay at the named port of origin.  This means that the consignee must bear all costs and risk of loss/damage to the goods from that point.  The FAS term requires the consignee to clear the goods for export along with paying the terminal charges. It should not be used when the consignee cannot carry out directly or indirectly the export formalities.   This term can only be used for sea or inland waterway transport.

FOB (Free On Board)
One of the most commonly used-and misused-terms, FOB means that the shipper uses his freight forwarder to move the merchandise to the port or designated point of origin.   The shipper fulfils their obligation to deliver once the goods have passed over the ship’s rail at the named port of origin.  The consignee bears all costs and risk of loss/damage to the goods from that point and the term requires the shipper to clear the goods for export.  The consignee’s responsibility for insurance and transportation begins at the same moment.  The term FOB specifically refers to ocean or inland waterway transportation of goods.

CFR (Cost and Freight)
This term formerly known as CNF (C&F) defines two distinct and separate responsibilities-one is dealing with the actual cost of merchandise “C” and the other “F” refers to the freight charges to a predetermined destination point.  It is the shipper’s responsibility to get goods from their door to the port of destination. “Delivery” is accomplished at this time. It is the consignee’s responsibility to cover insurance from the port of origin or port of shipment to consignee’s door. Given that the shipper is responsible for transportation, the shipper also chooses the forwarder.   This term can only be used for sea or inland waterway transport.

DAT (Delivered At Terminal)
This term is used for any type of shipments. The shipper pays for carriage to the terminal, except for costs related to import clearance, and assumes all risks up to the point that the goods are unloaded at the terminal.

DAP (Delivered At Place) – Updated in 2012, previously DDU
DAP term is used for any type of shipments. The shipper pays for carriage to the named place, except for costs related to import clearance, and assumes all risks prior to the point that the goods are ready for unloading by the buyer.

CIP (Carriage and Insurance Paid To)
This term is the containerized transport/multimodal equivalent of CIF (or can be used for roll on/roll off traffic). Seller pays for carriage and insurance to the named destination point, but risk passes when the goods are handed over to the first carrier. CIP relies on the carrier’s insurance, so the shipper is only required to purchase minimum coverage. When this particular agreement is in force, Freight Forwarders often act as carriers. The consignee’s insurance is effective when the goods are turned over to the Forwarder.

DDP (Delivered Duty Paid)
The shipper is responsible for delivering the goods to the named place in the country of the consignee, and pays all costs in bringing the goods to the destination including import duties and taxes. The shipper is not responsible for unloading. This term is often used in place of the non-Incoterm “Free In Store (FIS)”. This term places the maximum obligations on the shipper including the payment of duty and fees, and minimum obligations on the consignee.

Every effort has been made to ensure the accuracy of definitions however this document should be used for reference only and is not intended as legal advice. International Freight People Pty Ltd accepts no responsibility for errors or omissions.  Users should seek specific guidance from Incoterms® 2010 available through the ICC at www.iccbooks.com

Incoterms® is a registered trademark of the International Chamber of Commerce.

International Freight People Pty Ltd is a provider of international transport solutions for businesses either importing into Australia, or exporting to the world.
We pride ourselves on being a solutions driven business, as we are committed to investing the time to understand the exact needs of each of our Customers and providing a solution for those needs.